Peep Arrow Entertainment is the most important production in Italy for stage musical, founded by his artistic director Massimo Romeo Piparo.

PeepArrow Entertainment is the musical production company set up in 2011 by Massimo Romeo Piparo, who is also the Artistic director of the “Teatro Sistina” in Rome.

In 2019/2020 season Peep Arrow is engaged in the production of the musical “We will rock you” played by international rock star Anastasia. The show will be on tour in several European countries, in co-production with TEC International.

In the same season he produced a new edition of the musical “The Full Monty” with important Italian performers like Paolo Conticini, Luca Ward, Gianni Fantoni, Jonis Bascir and Nicolas Vaporidis.

In March 2018 opened in Italy “School of Rock” the Andrew Lloyd Webber’s musical with the most popular comician Lillo Petrolo and a great cast including 13 teen agers musicians/performers, with 3 live bands. The show runs also in 2019-2020 season. 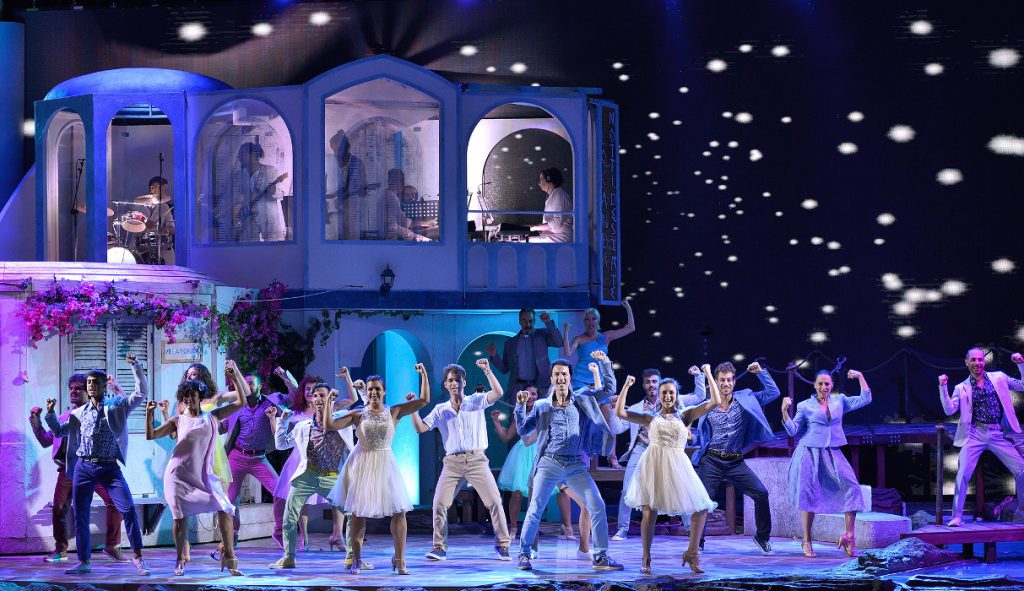 In 2017 PeepArrow produced a new version of the musical “Mamma Mia!”, adapted and directed by Massimo Romeo Piparo, in coproduction with Teatro Sistina and licensed by Music Theatre International (Europe).

Produced by PeepArrow, in 2016 the first Italian version of the musical “Evita” has been staged, starring a special guest: the Italian singer Malika Ayane as Evita Peron.

In addition to many awards obtained, in 2016 Peep Arrow has won in Hollad the MUSICALWORLD AWARDS as Best International Musical with “Jesus Christ Superstar”. 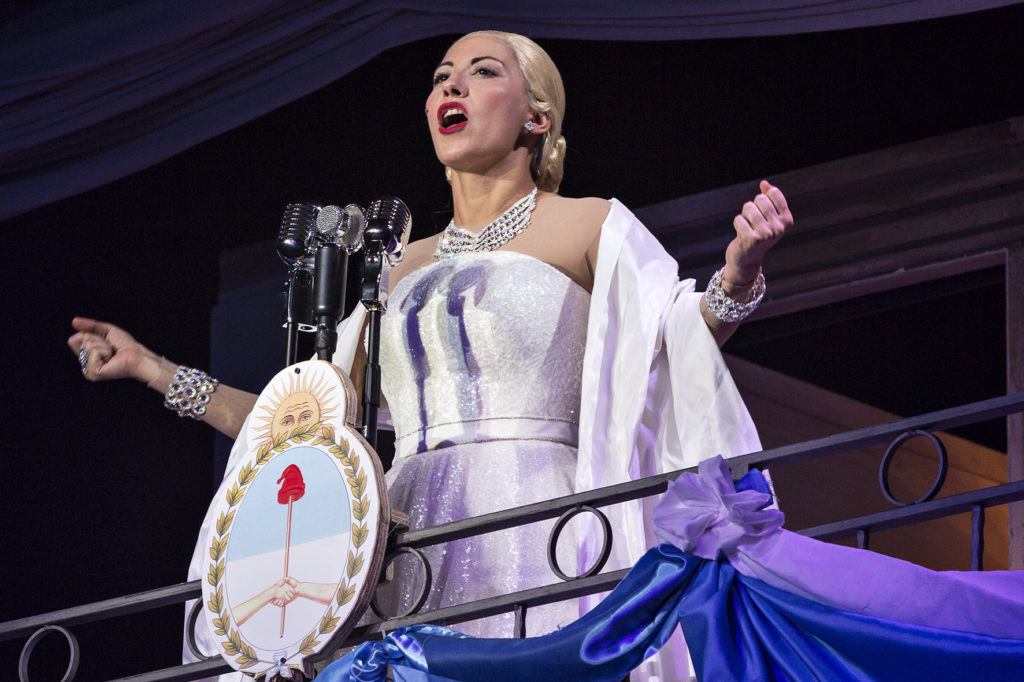 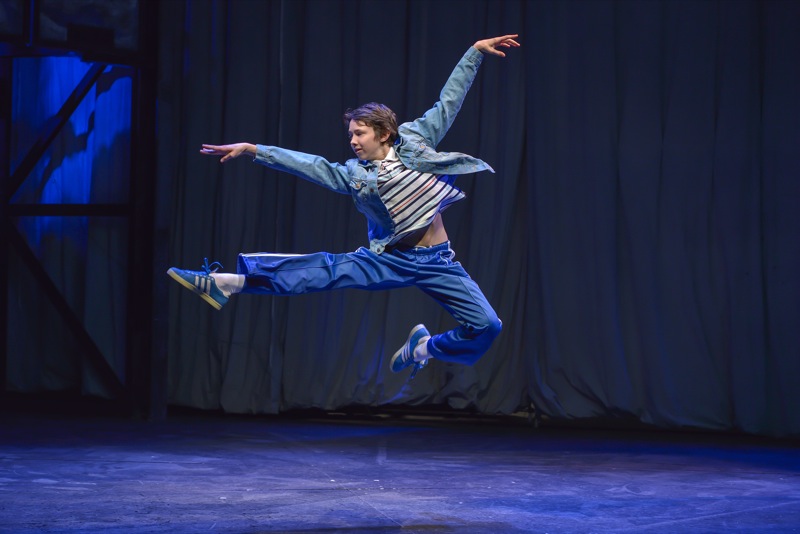 In 2015, Elton John allowed Peep Arrow to adapt and translate into Italian the musical “Billy Elliot”: this is the first time such musical has been produced entirely in Italy and the script hasn’t been written in English language. The show opens for the first time in Rome, at the Teatro Sistina, starring the little kid Alessandro Frola as Billy Elliot, together with a talented cast and a live orchestra, followed by a long-running Italian tour.

In the same year, Peep Arrow is also engaged for the executive production of the Italian musical “Il Marchese del grillo” featuring Enrico Montesano, a production by the Teatro Sistina in collaboration with MF Produzioni.

PeepArrow, in collaboration with Teatro Sistina, in December 2014 produces the musical “Tutti insieme appassionatamente” (“The sound of Music”), casting the experienced couple of actors Luca Ward and Vittoria Belvedere, in the roles of Capitain Von Trapp and the charismatic Maria. An endless fairytale, set in Austria during the 30’s,  where love and family win it all; a musical characterised by a noticeable cast, including 7 super-talented kids. 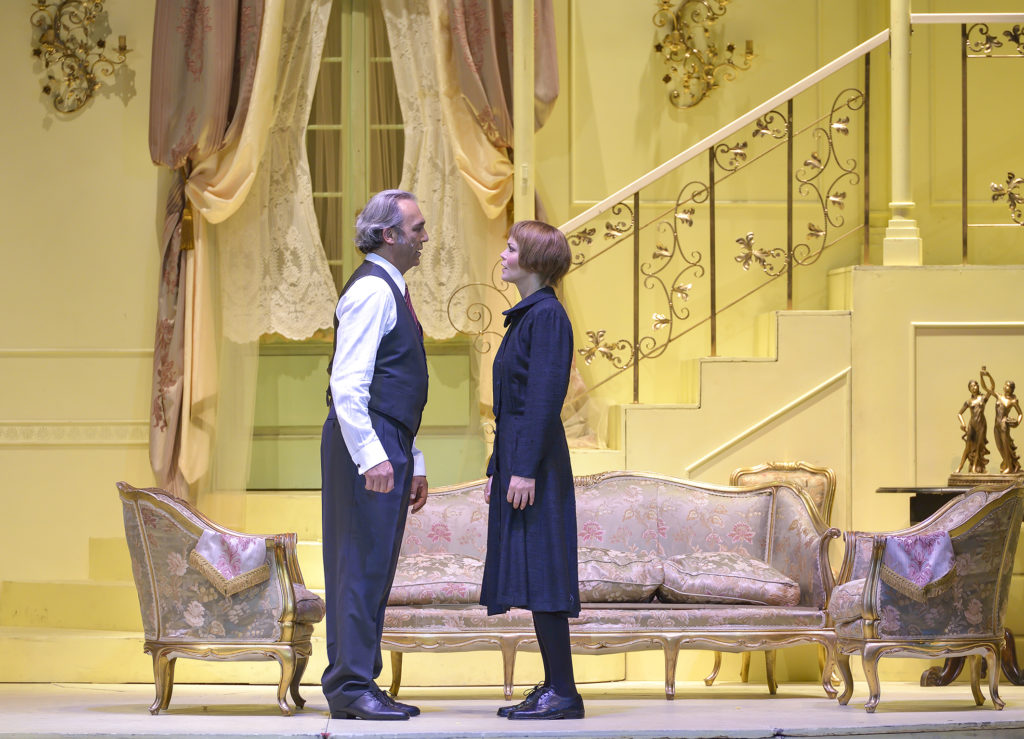 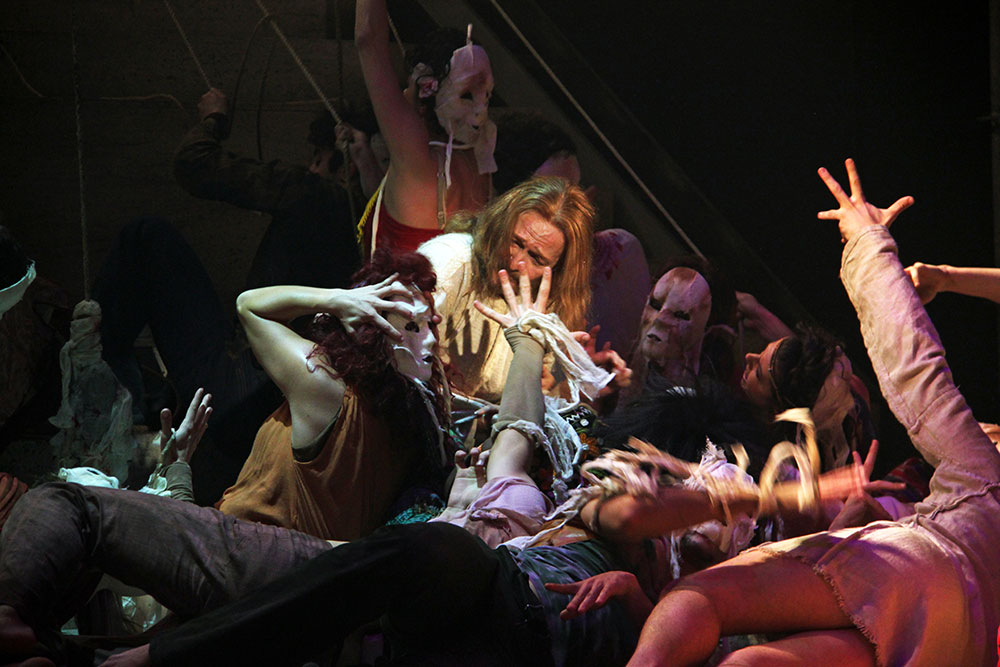 Still, in 2014 Massimo Romeo Piparo directs a special-event version of “Jesus Christ Superstar”, involving in the cast Ted Neeley – legendary Jesus interpreter in the original movie – supported by Simona Molinari, Shal Shapiro and the Italian rockband “I Negrita” with the frontman Pau in the role of Pilato. Later, the show has been mounted again and has visited the Arena of Verona, Rome and Milan with an exclusive cast that, besides Ted Neeley, features other 2 leading characters of the original movie: Yvonne Elliman as Maddalena and Barry Dennen as Pilato.

Applauded even by Tim Rice, the version, still with Ted Neeley, in 2015 – 2016 opens a tour in both Italy and Europe, with sold-out encore performances. In season 2016-2017-2018, another “Jesus Christ Superstar” tour has been launched, visiting Holland, Belgium, Bulgary, Spain and Italy with the cast still starring Ted Neeley.

With a cast starring Flavio Montrucchio (as Adamo) and Roberta Lanfranchi (as Milly), in 2014 “Sette spose per sette fratelli” (“Seven brides for seven brothers”)makes its debut at the Teatro Sistina, running tours for 2 years all-over Italy. A timeless story of the Pontepee’s, rowdy woodsmen coming from Oregon who, thanks to Molly’s help, become perfect gentlemen and get married to the felt-in-love girls in town. 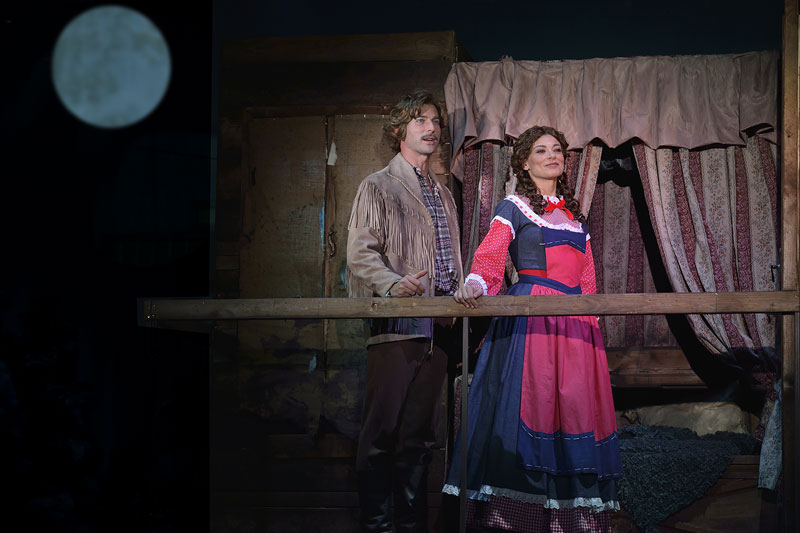 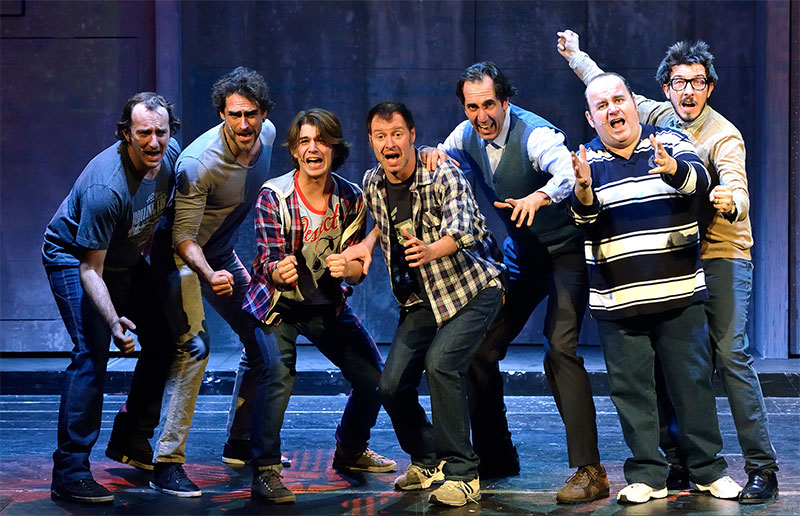 “La Cage aux Folles” is the 70’s full-of-glamor heartwarming love-story settled in a very “special” club of the Costa Azzurra. It is a happy-ending passionate true love story, full of sensational coup de théâtre, with music by Jerry Herman (“Hello Dolly” and “Zia Mame”) and impeccable script written by Jean Poiret.
The 2011/2012 show’s leading roles have been interpreted by Massimo Ghini (as Zazà) and Cesare Bocci (as Renato). The 2012/2013 edition stars Enzo Iacchetti (as Zazà) and Marco Columbro (as Renato).

Still, in season 2011/2012, Massimo Romeo Piparo directs and mounts, for the Teatro Sistina, the remake of the musical comedy “RINALDO IN CAMPO” by Garinei & Giovannini, with songs by Domenico Modugno, in order to celebrate the 150th anniversary of the Unità d’Italia (the celebration of the unification of Italy). Artistic direction is by Massimo Romeo Piparo. 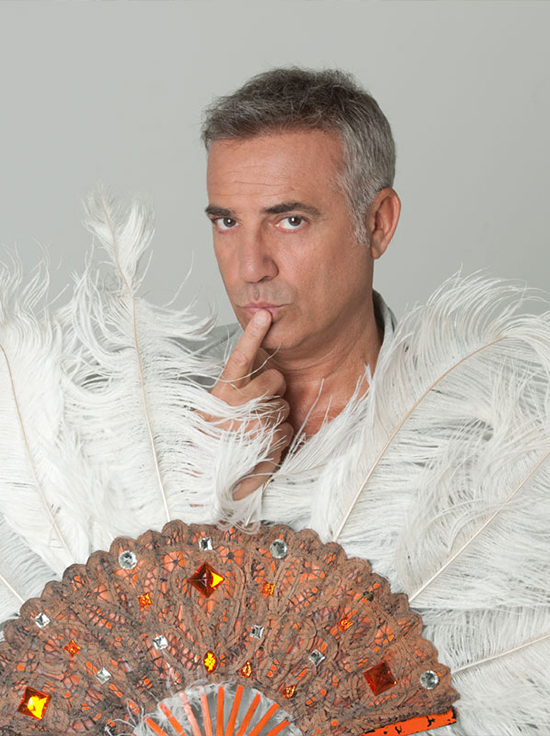 2012/2013 “My Fair Lady” is staged, a co-production with Teatro Sistina directed by Gianmario Longoni: one of the most appreciated classics in the musical history starring Vittoria Belvedere (as Eliza Doolittle) and Luca Ward (as Mr. Higgins), with Aldo Ralli (as Alfred Doolittle) and Enrico Baroni (as Col. Pickering).

Massimo Romeo Piparo changed the way of interpreting the “Musical opera” in Italy, proposing the real musical, which involves a live-orchestra and a progressive-action development through singing dialogs, music and dance. 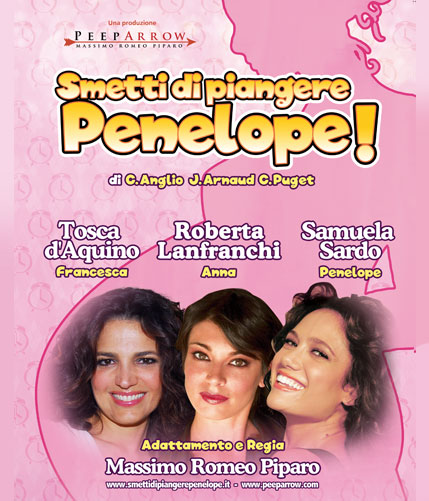 The 2011 production is marked with an all-female brilliant comedy: “SMETTI DI PIANGERE PENELOPE!” that, after the tremendous success obtained in Paris, arrives in Italy for the first time. The Massimo Romeo Piparo adapted and directed version of “Smetti di piangere Penelope!” brings on stage one of the most contemporary topic of the womankind: “Il mio orologio biologico ha deciso: io faccio un figlio, chi c’è…c’è” (“The body clock’s decided for me: I’ll have a baby, no matter who’s with me!”). The cast stars Tosca D’Aquino, Nicoletta Romanoff (2010/2011 season), Roberta Lanfranchi (2011/2012 season) and Samuela Sardo.

Not only the production aims to “grow” and launch new young talented singers and actors, but also features the participation of international stars. Besides the memorable Carl Anderson and the already-mentioned Amii Stewart, also appreciated as performer of Ennio Morricone and Nicola Piovani’s music, other notable cast members were Jaime Rogers, choreographer and dancer in “West Side Story” movie, Sebastien Torkia, Rocky Roberts and Bob Simon. 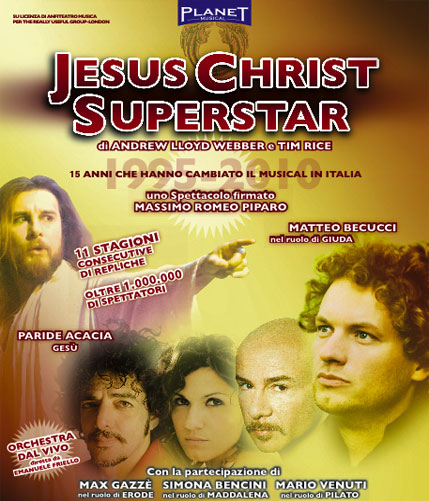 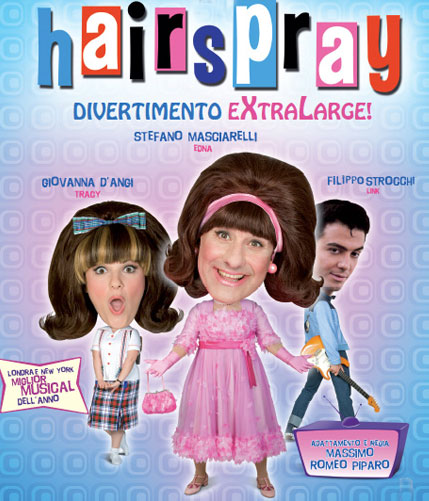 2007 is the year of “Alta Societa” (“High Society”) with Vanessa Incontrada: an Italian premiere of a performance already played in Brodway and London West End stages.

The theatrical season 2008/2009 is marked with two new musicals: the Italian version of “Hairspray” with Giovanna D’Angi and Stefano Masciarelli, that was nominated “Best musical of the year” in London and Broadway, as well as “Cenerentola” (“Cinderella”) performed by Roberta Lanfranchi, Antonio Cupo, with the amazing music by Rodgers& Hammerstein.

In 2006 “La febbre del sabato sera” (“Saturday Night Fever”) has been put on stage with a cast featuring the famous instructors by “Ballando con le stelle” (“Dancing with the Stars”), a lucky Italian tv program, whose author and artistic director is Massimo Piparo. This musical has runned in many Italian theatres and arenas gaining a lot of success. 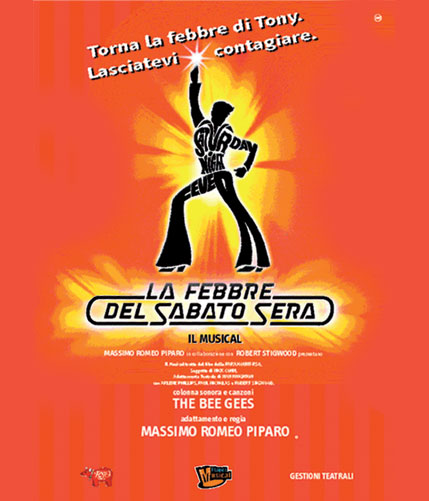 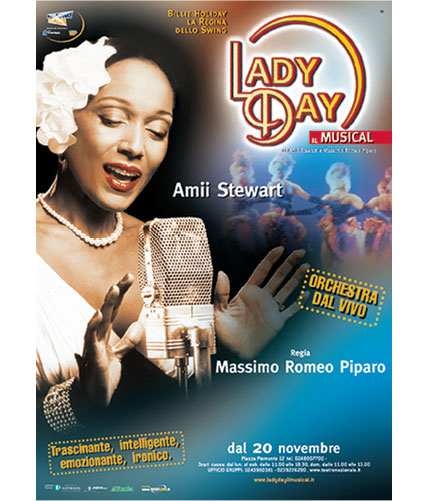 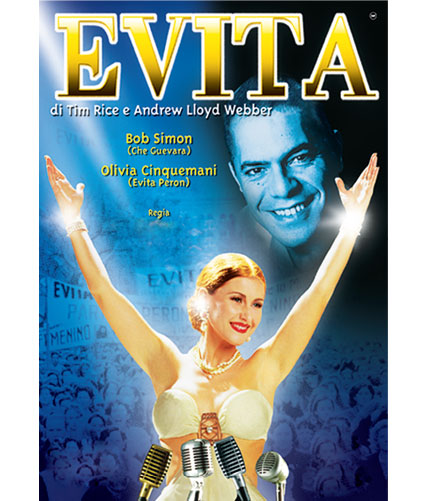 In 1998 Massimo Romeo Piparo staged “Tommy” (“The Who’s Tommy”), the non-conformist musical written by Pete Townshend of “The Who”. In 1999 Piparo staged “My fair Lady”.

Massimo Romeo Piparo commitment to theatrical production starts in 1994 with “Jesus Christ Superstar” by Webber and Rice: a musical that has been run up-to-now with several different settings in both Italy and abroad, winning several awards and honours, achieving roaring success of audience and critics.

Between the several performances of “Jesus Christ Superstar”, in the 1999’s one, Piparo involves an exceptional cast: the great Carl Anderson playing Judas (the same role he performed in the movie directed by Norman Jewison) and the awesome Amii Stewart interpreting Mary Magdalene.

The musical wins the “Bob Fosse – Targa R. Rascel special award” for the staging set. In 2000, the Great Jubilee year, “Jesus Christ Superstar” obtained a formal acknowledgment from the Holy See, and the actors  Carl Anderson, Olivia Cinquemani (as Mary Magdalene) and Paride Acacia (as Jesus) have been received by Pope Giovanni Paolo II 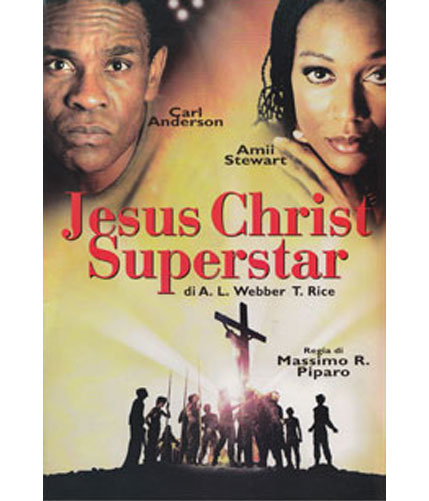 The musical wins the “Bob Fosse – Targa R. Rascel special award” for the staging set. In 2000, the Great Jubilee year, “Jesus Christ Superstar” obtained a formal acknowledgment from the Holy See, and the actors  Carl Anderson, Olivia Cinquemani (as Mary Magdalene) and Paride Acacia (as Jesus) have been received by Pope Giovanni Paolo II.