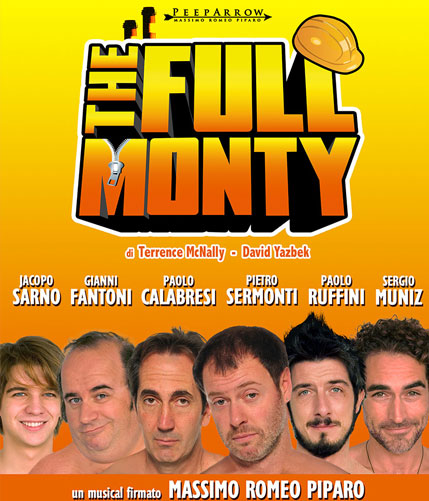 In 1997, the movie was box office and Oscar winner, ironically about the crisis that hit England in those years; in 2000 the film became a theatrical musical, represented with enormous success on the stages of the world.

Today the theme of the show, the crisis and the desire to get busy to reinvent themselves … come back very timely and PeepArrow Entertainment, brings on stage the story of the most loved and applauded breaker strippers of all time.

Reached, even doubled, the most ambitious goal: to involve a real unemployed person in the cast, or rather two: Marco Serafini and Simone Lagrasta passed a very special casting . The auditions, strictly reserved for all workers who have lost their employment in the last 24 months, have been promoted directly by the internal channels of the main Italian trade unions (Cisl, Cgil, Uil, Fim), by the Employment Centers of the Province of Turin and from PeepArrow Entertainment. The initiative was born to offer a concrete job opportunity: two “real” unemployed directed by Massimo Romeo Piparo with a regular one-year contract.

The director and the adaptation of the musical will be signed by Massimo Romeo Piparo, who is happy to stage such an important cast and a production of a high artistic and financial level in a moment of great crisis.

The story features a group of unemployed workers who live in the industrial suburbs of a large city, divided between a passion for football and a salary from re-invent. The six workers embark on a company out of the ordinary to gather a little ‘money necessary for their respective tasks: set up a show of male striptease. The training and the tests they undergo allow them to regain confidence in themselves, and all their efforts to redeem themselves culminate in a joyful and liberating striptease that marks the beginning of a new life for each of them. Between bitterness and irony, songs and famous hits, there is a fun and intelligent show.