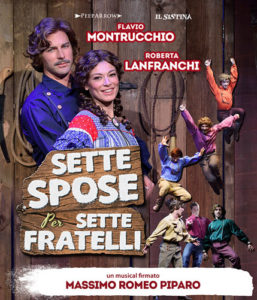 In 1954 MGM produces the movie SEVEN BRIDESE FOR SEVEN BROTHERS directed by Stanley Donen; the magical fusion between the screenplay, the music and the extraordinary choreography by Michael Kidd made it one of the most entertaining and long-lived musicals on the big screen, a cult that has been re-proposed by the TV even today with great ratings. The music by Adolph Deutsch and Saul Chaplin won an Oscar and the movie won four nominations for best movie, best screenplay, best photography and best editing.

On the 60th anniversary of the movie’s release, PeepArrow Entertainment and Il Sistina stage a new sparkling musical edition in Italy with Flavio Montrucchio, Roberta Lanfranchi and a cast of 20 dancers-singers-acrobats.

The seven Pontipee brothers, rude lumberjacks, live isolated between woods and mountains. Tired of loneliness, the oldest of them, Adam, wants to take a wife. Conquest Milly who soon discovers she has to take care not only of her husband but of other 6 rough untidy men … As in the fairy tale of Snow White she transforms the dirty lodge of the woodsmen into a nice house and teaches the brothers of Adam the art of courtship , so that they too can conquer a girl and get married. After a thousand vicissitudes, courtships, dances in the country, fights between pretenders, kidnappings of girls and much more, the happy end will arrive on time with 6 new marriages and a new baby….

From the movie to the stage, there will be the fun adventures of the Pontepee brothers and their lovers, with songs performed live and spectacular acrobatic choreographies: a perfect theatrical event that will involve and excite viewers of all ages.