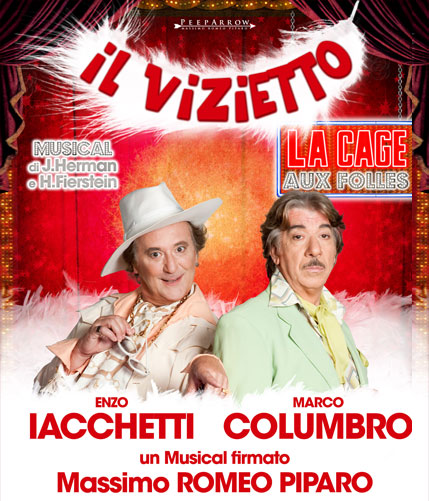 “LA CAGE AUX FOLLES” is a 1983 American musical by Jerry Herman (music and lyrics) and Harvey Fierstein (libretto). It is an adaptation of Jean Poiret’s homonymous French play of 1973 from which the film “Il Vizietto” was taken in 1979.

The Musical made its debut on August 21st 1983 and closed on November 12th 1987 after 1761 performances. The direction of the show was entrusted to Arthur Laurents and the choreography to Scott Salmon. The protagonists were played by Gene Barry and George Hearn. The London production opened on 7 May 1986 and remained on stage for 8 months.

Among the most popular songs of this production deserve mention The Best of Times and above all I Am What I Am (“I am what I am”), a hymn to “diversity” (“this is my world, / so I want a pinch of pride “), which became famous even among the general public thanks to the interpretation of numerous singers, first of all for the disco version of Gloria Gaynor, which had a great success with the public.

The story tells the story of Renato and his companion Albin: they run a sparkling nightclub for transvestites in Saint Tropez, where Albin performs as a drag queen with the stage name of “Zazà”. The two, who have been living together for over 20 years, have grown up with Laurent, son of Renato, born of a fleeting heterosexual relationship with a dancer.
The quiet life of the two is however severely tested when Laurent announces that he has been engaged to the daughter of a reactionary and ultra-conservative politician and that, on the occasion of the visit of future in-laws, he would like Albin not to be present impression on the future father-in-law. From here begins a series of comic misunderstandings, which enliven the story until a surprise conclusion.

The original 1983 production won 6 Tony Awards (the Musical Oscars), including Best Musical. Tony Award for the re-edition of 2010 as “Best Revival”